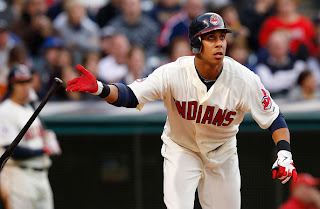 By:  Stephen Parsons
Felix Hernandez vs Justin Masterson, ace against ace, Progressive Field.  What a way for Sunday baseball.  The Tribe would seek their 7th win against a Cy Young pitcher this season, and it is only May 19th.  Masterson would pitch a Masterpiece today as the Tribe would win decisively 6-0.
It all started in the Bottom of the 1st inning, Michael Brantley batted well out of the 3-hole today.  He drove in Michael Bourn with a single to right field.  With the throw going to the plate, this allowed Brantley to advance to 2nd base.  This set up Nick Swisher to drive in Brantley, unconventionally.

Swisher reached safe on a fielding error by Justin Smoak, and Brantley was able to score, so just like that 2-0 Cleveland.
In the Bottom of the 2nd inning, Michael Brantley connected again, hitting a 3-run home run to deep center field.  This scored Michael Bourn and Jason Kipnis making it 5-0 Tribe.
In the Bottom of the 4th, Andrew Stubbs grounded out scoring Mike Aviles to extend the lead to 6-0.
Felix Hernandez only lasted 5 innings today.  He was tagged for 5 earned runs on 8 hits.  He struck out 8, Andrew Stubbs twice, and walked 2 batters.
Justin Masterson would pitch 7 brilliant innings allowing no runs on 3 hits.  He struck out a season high 11 batters and walked only 2.
Justin Masterson earned the win improving to 7-2 with a 2.83 ERA.  Felix Hernandez took the loss falling to 5-3 with a 2.07 ERA.
Time of the game was 2 hours and 39 minutes.  Game attendance was 19,744.
My Thoughts:
Outside of Justin Masterson, the offensive player of the game hands down was Michael Brantley.  Giving the off day to Asdrubal Cabrera, Brantley did very well in the 3-hole today going 2 for 4 with a home run and 4 runs batted in.
Indians are now 7-1 against Cy Young pitchers this season.  Cleveland has won 17 of their last 21 games.

Coming Up Next:
The Indians will attempt to go for the 4-game sweep tomorrow afternoon.  Seattle will start Hisashi Iwakuma.  He is 5-1 with a 1.84 ERA this season.  Cleveland will start veteran Scott Kazmir who is 2-2 with a 5.33 ERA this season.
First pitch is at 12:05 PM ET at Progressive Field.
This has been the Parsons Report
Posted by NoStaticRadio.com at 3:07 PM