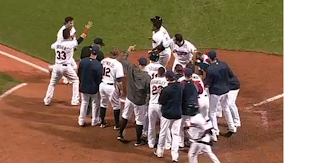 There was a trend heading into tonight's game.  The 2 previous Friday night games at Progressive Field were walk off wins for the Tribe.  Tonight would make it 3 out of 3, as Cleveland kept rolling over former manager Eric Wedge 6-3.

Ubaldo Jimenez was the starter for Cleveland.  He has been the hottest starter for the Tribe winning his last 3 starts, including last Saturday over former MVP Justin Verlander.

The scoring would start in the Bottom of the 2nd inning.  Jason Giambi hit a sac fly to deep right field, this scored Nick Swisher and advanced Carlos Santana to 3rd base.  Brandon Maurer would throw a wild pitch which scored Santana from 3rd base making it a 2-0 Cleveland advantage.

In the Top of the 4th Kendrys Morales hit a ball that still hasn't landed yet.  It was his 5th home run of the season and it cut the lead to 2-1 Indians.

Cleveland would respond in the Bottom of the 5th inning, Andrew Stubbs hit a solo home run extending the lead to 3-1 Tribe.  This was Stubbs' 3rd home run of the season.

Rich Hill would come on to relieve Jimenez in the Top of the 6th, however he would blow the potential 4th straight win for Jimenez.  Raul Ibanez hit a 2-run home run off Hill tying the game at 3.  This was Ibanez's 7th home run of the season.

The book was officially closed on Ubaldo Jimenez.  5 innings pitched allowing 2 runs on 7 hits.  He struck out 9 and walked only 2.  He lowered his ERA to 5.31.

Enter Jason Kipnis to the plate.   Kipnis pulled a ball and drove it over the right field wall for the 6-3 win, walk off home run by Jason Kipnis, his 7th of the season.  Ball Game!

Time of the game was 3 hours and 37 minutes.  Game attendance was a season high 34,282 at Progressive Field.

Great win for the beginning of a 4-game series.  Jimenez continues to look great each start.  Baseball is a 162-game marathon, I don't expect it, but I will enjoy it, maybe he has finally developed to a point where he doesn't need his velocity at 97 mph to be effective.  We shall see more, loving what I am seeing at this point.

Ever since Jason Kipnis has been moved back to the 2-spot in the batting order we have seen the results.  I said 2 weeks ago that I felt he was heating up.  He has his batting average up to .244 with 7 home runs and 23 runs batted in.

First pitch is at 1:05 at Progressive Field tomorrow afternoon.
This has been the Parsons Report.
Posted by NoStaticRadio.com at 11:18 PM