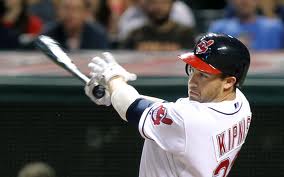 Cleveland has been rolling as of late winning 9 of 10 games.  Today they attempted to sweep the Oakland Athletics for the 1st time in Cleveland since 1995.  That series had a signature moment, Dennis Eckersly allowing a walk off grand slam to Manny Ramirez.  Eckersly was so surprised how far it was hit, it made him say WOW.

The signature moment in this series might be a few different factors.  The Indians pitching, Nick Swisher, or just how many home runs can Mark Reynolds hit.

The Tribe would face another former Cy Young award winner in Bartolo Colon.  Colon began his career in Cleveland before being traded to Montreal for prospects Brandon Phillips, Grady Sizemore, and Cliff Lee.

The Indians did not waste any time getting on the scoreboard today.  Jason Kipnis hit a 2-run home run scoring Michael Brantley.  This was Kipnis’ 4th home run of the season.

In the Bottom of the 2nd inning Yan Gomes hit a double which scored Mark Reynolds.  Gomes advanced to 3rd base due to a throwing error by Brandon Moss.  Andrew Stubbs continued the assault scoring Gomes with a single.

In the Bottom of the 3rd inning, Nick Swisher smashed his 2nd home run in the past 2 games over the right field wall.  This was Swisher’s 5th home run of the year.

Jason Giambi drove in Asdrubal Cabrera to make it 7-0 in the Bottom of the 5th.  Then Mark Reynolds belted his 11th home run of the season making it 9-0 Cleveland.

Scott Kazmir was flat out dominant today.  He pitched 6 innings allowing only 1 run on 5 hits.  He also struck out 10 Oakland hitters.

Excellent series by the Indians, great home stand.  They win 8 of 9 on the home stand, and 10 of their last 11 games.

This was a great series against one of the best scoring teams in all of baseball.
It all means nothing if they get swept this weekend in Detroit.

This has been the Parsons Report.
Posted by NoStaticRadio.com at 5:34 PM